Kids Creek, a cherished stream on Traverse City’s west side, is on the State of Michigan’s Impaired Water’s List due to a poor macroinvertebrate (aquatic insect) community, mainly because of stormwater issues. Kids Creek drains almost 7 square miles and is a major tributary to the Boardman River, a State Designated Natural River. It experiences severe changes in flow due to stormwater inputs during rain and snowmelt events and exhibits extreme flashiness, often flooding portions of the urban area within Traverse City. This flashiness has led to scoured stream bottoms and increased sedimentation from eroding stream banks within the creek, causing a lack of habitat for aquatic insects. Additionally, contaminated runoff from road salt in winter may be negatively affecting aquatic insect populations in the creek. The Michigan Department of Natural Resources (MDNR) Fisheries Division considers Kids Creek an important and critical spawning stream, nursery stream, and coldwater contributor to Grand Traverse Bay in Lake Michigan.

In 2013, The Watershed Center worked with the Michigan Department of Environment, Great Lakes and Energy (EGLE), the U.S. Environmental Protection Agency (EPA), and many other partners to draft and begin implementation of an Action Plan for Kids Creek to address water quality issues and highlight priority tasks aimed at helping improve water quality. This began The Watershed Center’s large-scale Kids Creek Restoration Project with the goal of reducing the impact of stormwater and sedimentation on Kids Creek and its tributaries so it can be removed from the Impaired Waters List. 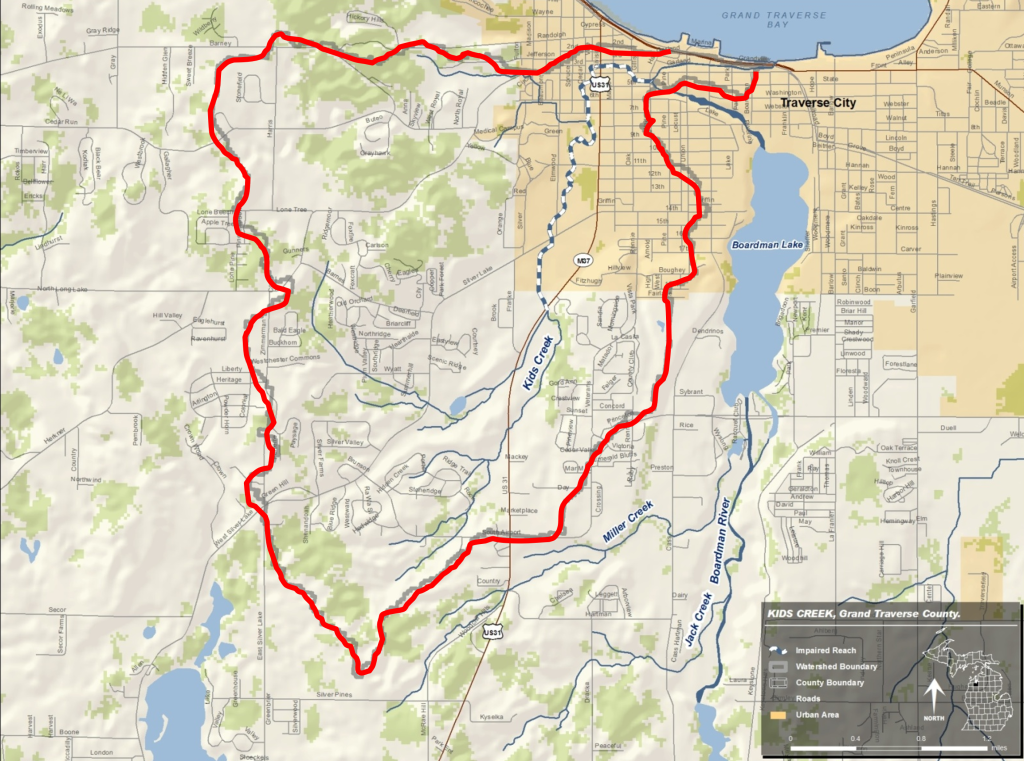 More than $9 million in grant funds have been acquired to implement key portions of the project, including funding from EGLE, EPA-Great Lakes Restoration Initiative, National Oceanic and Atmospheric Administration, Great Lakes Fishery Trust, and private foundations. Project work has focused on reducing stormwater inputs to Kids Creek from urban areas using green infrastructure and low impact development techniques. In conjunction with these projects, the next components of the Kids Creek Restoration Project focus on replacing undersized road crossings, increasing infiltration through the restoration of riparian corridors, providing stream bank stability, increasing floodplain storage during periods of high flow within and alongside the channel, and restoring in-stream habitat and natural stream function.

We have completed nearly 2 dozen projects and have several underway that will help us reach our goal of getting Kids Creek of the State’s Impaired Water’s List:

We restore the waterways that lead to Grand Traverse Bay.